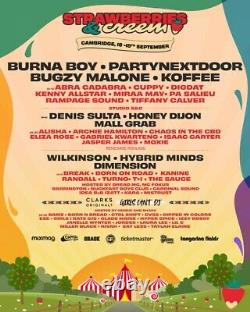 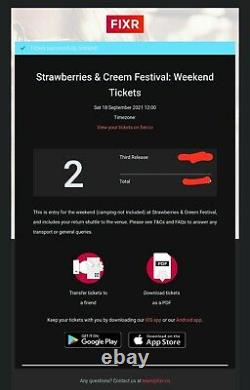 Back in early 2014, the one-day event was conceived by a group of six club night promoters who met together at the city's famous Fitzbillies cafe to discuss creating something new and different for Cambridge's music scene. They decided on a garden party at the start of the summer and - as they sat eating scones with jam and clotted cream - the name Strawberries & Creem quickly evolved. The first edition was a huge success, attracting over 1,000 people to hear headliners David Rodigan and Shy FX.

In 2015, after Strawberries & Creem moved to Haggis Farm and booked Skepta along with Stylo G, My Nu Leng and Grandmaster Flash, the attendance swelled to over 2,500. With that strong foundation in place, S&C has gone from strength to strength in the years that followed. Line-ups have featured both the biggest names and freshest talent including the likes of Kano, Big Narstie, Nelly, Wiley, Shaggy, J Hus, Mike Skinner, Artful Dodger, Donae'o, T-Pain, Kojo Funds, NOT3S and many more. In 2019 with a bill topped by Stefflon Don and Ms Dynamite, the festival welcomed over 15,000 people. After being cancelled in 2020, organisers have announced Strawberries & Creem will return to a new Cambridge-area site and expand to two full days from 18 - 19 September 2021, with a huge line-up of over 50 artists led by PARTYNEXTDOOR, Burna Boy, Bugzy Malone and Koffee.

Strawberries & Creem's 2021 headliners. Burna Boy - Considered to be among Africa's brightest stars, the gifted singer-songwriter born as Damini Ogulu in Nigeria has released many EPs, singles, mixtapes and albums including 2018's extraordinary OUTSIDE and 2019's African Giant. His latest album, Twice As Tall, came out in November 2020 and garnered Burna Boy a Grammy nomination in the World Music Album category. PARTYNEXTDOOR - The Canadian singer-songwriter whose real name is Jahron Brathwaite has been making electronic-infused R&B since he was 18. Signed to Drake's OVO record label in 2013, he won a slew of awards for his first two albums - 2014's PARTYNEXTDOOR TWO and 2016's PARTYNEXTDOOR 3 - and released his latest project, Partymobile, in March 2020.

Bugzy Malone - In the past decade, the Manchester-born grime MC has taken the UK by storm. His first three consecutive EPs - Walk With Me, Facing Time and King Of The North - all debuted in the top 10 of the official UK albums chart. Following his acclaimed 2018 debut B.

The item "2 x Strawberries and Creem Festival Weekend Ticket 18-19th September 2021" is in sale since Tuesday, August 17, 2021. This item is in the category "Events Tickets\Experiences". The seller is "copmonaco" and is located in Winchester. This item can be shipped worldwide.