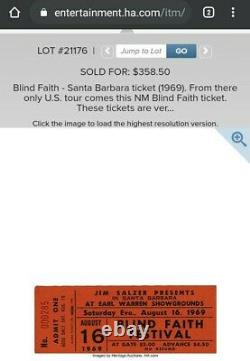 This listing features an original (1969) BLIND FAITH CONCERT TICKET from a show in Santa Barbara, CA which took place on August 16th, 1969. Considered the first super-group, Blind Faith was formed from the ashes of Cream and Traffic as Eric Clapton, Steve Winwood, Ginger Baker and Rick Grech got together for informal jams.

When the press and record companies got wind, they were pressured to go public, debuting on June 7th, 1969. By the end of August, only three months later, they had split. This astoundingly rare NRMT unused ticket for the Blind Faith Festival August 16th in Santa Barbara, California represents a piece of music history.

This vintage ticket is over 50 years old and still in amazing condition! This stub is rarely ever seen and finding an unused example in this condition is next to impossible.

The only notable flaw can be seen on the back where the ticket was mounted for display purposes. Otherwise, this example is NEAR MINT PLUS! Most tickets were torn by the festival ticket takers. Only a few of these unuaed examples survived.