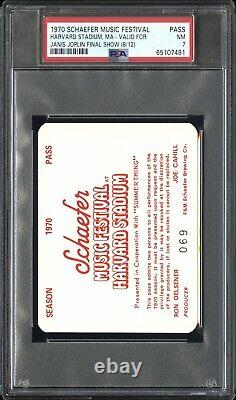 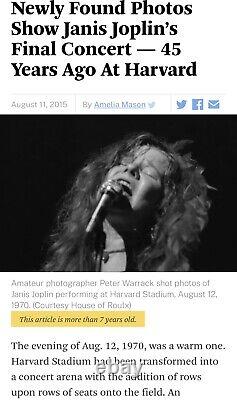 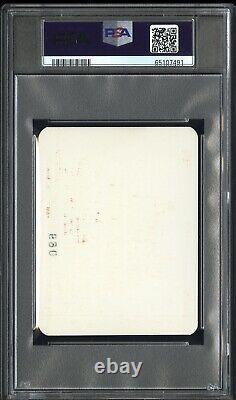 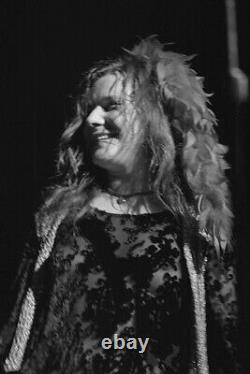 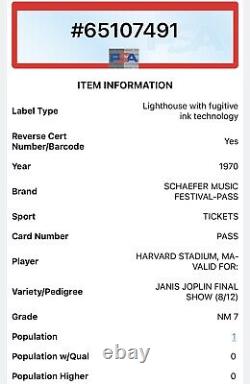 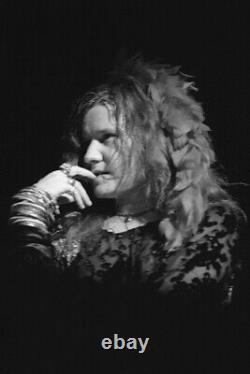 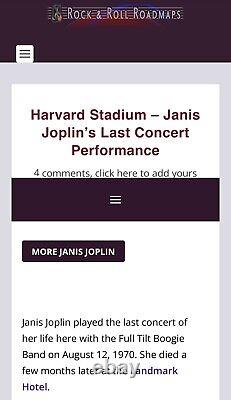 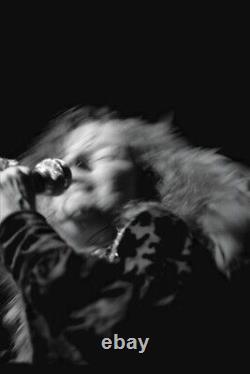 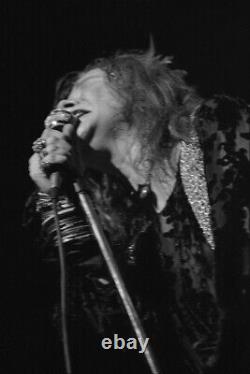 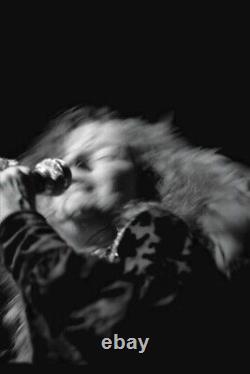 PSA POPULATION REPORT 1 of 1. 12, 1970, was a warm one. Harvard Stadium had been transformed into a concert arena with the addition of rows upon rows of seats onto the field. An estimated 40,000 spectators were crammed inside. After it was discovered that some sound equipment had been stolen, the show was delayed.

According to several accounts, the crowd was restless, near rioting. They were waiting for Janis Joplin. "Oddly, while we were sitting there-and the crowd was getting into something, it became very smoky and sweet there, let's put it that way-we could see, straight ahead, the open-scaffolding stage, " says Kevin McElroy, who was seated near the front with his boyfriend, Peter Warrack.

And she had a bottle of Southern Comfort, and she was just in a world of her own there. She just was doing what she wanted to do in the moment. After another hour-and-a-half or so-it was really quite a delay-she literally burst onto the stage.

Two months later, Joplin was dead. That near-disaster concert at Harvard Stadium, it turned out, was her last public performance.

It was a special night for Warrack as well. An amateur photographer who liked to photograph celebrities and collect autographs, he shot almost a whole roll of film from down in the front, a telephoto lens aimed upward at the star as she threw herself across the stage.

Concerts weren't documented as thoroughly back then as they are now, thanks to Instagram and Twitter and a camera on every smartphone, so those 24 black-and-white close-ups are, seemingly, some of the few existing relics of the historic concert. The Liverpool-born Warrack died in 2008, but nearly his entire collection of photographs-around 15,000-remained unpublished during his lifetime. Until recently they languished in a vast collection of binders in several closets at McElroy's residence in Boston's South End. "This wasn't just a guy who was celebrity star-struck who snapped pictures, he was actually a really good photographer, " says House of Roulx's Jared Gendron. Because there's a difference between someone who just runs around snapping pictures paparazzi-style in the 1970s, versus somebody who has that artistic eye.

Taken together, Warrack's photographs of Joplin are like a flip-book of the 27-year-old singer that capture a few fleeting, candid moments onstage. They are portraits, really, set against a black background, zoomed in close enough to count the bracelets on her wrist. In one shot, she holds a finger pensively to her lips.

In another, she radiates, smiling as she looks over her shoulder. One photo captures her in motion, a blur of sweat and song. "She was feeling no pain, literally, " says McElroy.

She was interacting with the audience in almost a-well, it wasn't almost, it was, it was a sexual banter back and forth. They were calling up to her, they wanted her, and she wanted them. At one point in time she says,'Yeah, I'll take you on. That was part of who she was. When Joplin died on Oct.

4, 1970, Reuters ran an obituary that spent as much time detailing her boozy, contentious persona as her actual musicianship. In the years since, she has become something of a feminist icon, in addition to a bona fide rock'n' roll legend. Her voice-that gravelly, SoCo-soaked voice-epitomizes the capacity of a rare kind of greatness to translate pain into art. "I think people today might not understand-you know, Janis was young, she was only 20-odd, and she was one of our current rock stars, " says McElroy. She was just somebody who was touring, and somebody who was good, and somebody you wanted to see.

Over the last 45 years, Janis has become something else, in a way most people who die young do become. And I think young people today would look at Janis and not see her in the same light that we did.

In McElroy's telling, Warrack's work was driven by a fascination with both the glamour of celebrity as well as the humanity behind it. The photographs of Joplin, he says, show a side of her that has been largely erased by her iconic status and all that she symbolizes now. "I think we see something different when we look back, " says McElroy.

I don't think we see just Janis herself. [That night] was just Janis, performing. This item is in the category "Entertainment Memorabilia\Music Memorabilia\Rock & Pop\Artists J\Joplin, Janis". The seller is "gidez32" and is located in this country: US. This item can be shipped to United States, Canada.